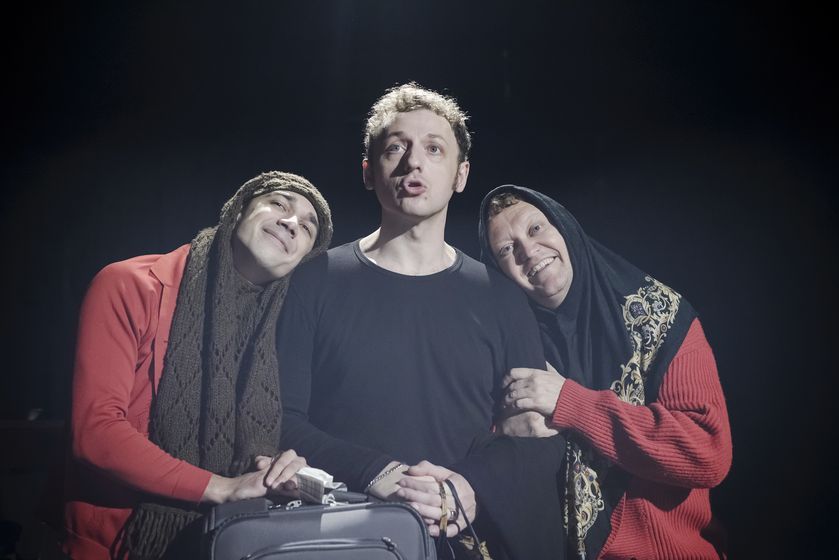 Play “Dead Souls” based on the poem by N.V.Gogol directed by Oleg Lipovetsky has, with no doubt, become a success for the theater. Only because of the creative symbiosis between production (director - Oleg Lipovetsky, artist - Shifra Kazhdan, choreographer - Olga Vasilyeva, composer - Alexander Ulaev) and actor (Oleg Ermolaev, Victor Charikov, Maxim Potapchenko) groups such vivid and unusual play could have been created. It has already been noted by many critics and has become a participant of various festivals.

In March 2018 at the regional festival "Theatrical Spring" the play was nominated in several categories: “The best premier of the season in a municipal drama theater” and “The best work of an artist in a drama theater”.

Director Oleg Lipovetsky was awarded with the diploma of the Association of Theater Critics.

“Gogol called the “Dead Souls” a poem. Just as Homer called the Odyssey. In both cases its a roadmovie. Only Odysseus keeps his way home to his family, and Chichikov moves to nowhere. And the direction of movement of Pavel Ivanovich coincides with the way of a bird-troika, about which Gogol writes: “Don’t you, Russia rush like a jaunty dashing troika?... ...and it is racing inspired by God! Russia, where are you rushing? Give me the answer. It does not answer…”
In this poem Gogol, with all the love he had, tried to describe Russia as a whole. How it was, how it is, and how it is going to be. On the one hand - it is an excellent lyrical work, and on the other - a rough, biased and very funny examination of russian characters and russian society.

I really wanted to keep both hypostases of the Gogol’s text. This is why I had to stage a new play and introduce new characters, that are responsible for the lyrical part of the performance. It does not mean that Gogol doesn’t have them, they just were never given the floor before. And these are horses from the Chichikov’s troika. Bay, Chubry and Assessor. And, as you clearly understand, horses that speak are not simply horses anymore. All in all, on the stage you can see the bird-troika. In fact, there are only three actors performing. They play all the roles. In Ancient Russia three was a sacred number. Trinity, troika, three-headed serpent, three bogatyrs … You yourself could recall many good and bad threes, if you wanted to. Anyway, do not expect from us a brief of this big good book. Our play is an attempt of modern russian people to comprehend this great russian text and questions that it poses. And spectators are those who should find the answers.”